For my daughters' first birthday, I just had to make them cupcakes. They're really just healthy-ish muffins with a decadent sweet frosting. For adults, this would be good with sliced almonds, pecans or chocolate chips. Enjoy and Chanukah Samayach!


For the cupcakes: Combine dry ingredients and set aside. In a mixer, beat eggs with sugar and oil, then add the applesauce alternating with the dry ingredients. Mix only until combined. Pour batter into cupcake tins sprayed with cooking spray.

For the frosting: Combine ingredients and beat in a mixer until smooth and creamy. Refrigerate if you're not using it right away!
Posted by kosherliz at 6:07 AM No comments: Links to this post

Yay! Butternut squash is a Weight Watchers "points free" food, and it's so similar tasting to sweet potato that it makes a super-delicious oven-baked latke (although with the egg and oil, this isn't a completely "points free" food any longer (but it's still a pretty good bargain!). The natural sweetness of the squash combined with lots of pepper and salt adds so much dimension to the flavor and really makes the latkes delectable. Even my husband, who DOES NOT LIKE vegetables, ate these and asked for more.

Be warned: It takes extra time to get the latkes crispy. My squash latkes were in the oven for over 90 minutes. But, if you have the time, it's a truly healthy side dish and in my house, the dish they were served in was licked clean. If you are watching Weight Watchers points, my calculations indicate that a serving of two squash latkes is two points. Chanukah Samayach and please let me know how you like them!

Preheat oven to 425F (convection will take less time, so use if possible).

Peel and grate onions and squash and place both in a colander to drain excess moisture.

Transfer mixture to a large bowl and stir in the egg substitute, salt, pepper and canola oil. In a small bowl, mix together the baking powder and flour, and combine both mixtures.

Drop two to three tablespoons of the squash mixture onto baking sheets lined with parchment paper or nonstick foil (this is key!) that have been sprayed with cooking spray. Bake for 60-90 minutes, checking several times. The cooking time will vary based on the temperature of your oven and how well done you like your latkes. Latkes should be deep gold on both sides when done.

This makes approximately 20 small latkes. The recipe can be easily halved or doubled. Chanukah Samayach!
Posted by kosherliz at 11:47 AM 3 comments: Links to this post

I've committed this Hanukkah to making truly baked latkes. In previous years, I have made the incredibly sinful and delicious sweet potato and leek latkes and of course plenty of classic potato latkes, but these days I am generally making Weight Watchers-friendly recipes. I'm happy with this recipe as it really does yield a crispy, satisfying latke, and it fills your home with the same latke aroma as fried latkes, though it takes longer. The high cooking temperature combined with just a little bit of oil is what makes the dream a reality. (Note: For even healthier latkes try my new Butternut Squash latkes. They're fab!)

Preheat oven to 425F (convection will take less time, so use if possible).

Peel and grate onions and potatoes and place both in a colander to drain excess moisture. Stir mixture and repeat, allowing the potatoes to drain for at least 5 minutes. Place several paper towels on the mixture to ensure that most of the mixture has been drained.

Transfer potato mixture to a large bowl and stir in the egg substitute, salt, pepper and canola oil. In a small bowl, mix together the baking powder and flour, and combine both mixtures. Refrigerate mixture for 10 to 30 minutes.

Drop two to three tablespoons of the latke mixture into cupcake tins lined with parchment paper or nonstick foil (this is key!) that has been sprayed with cooking spray. You can also use baking sheets for more a more classic latke look. Bake for 20-30 minutes, then when the potato has pulled away from the side of the cupcake tin and browned as much as you like, turn the latkes over with a spoon or tongs, and bake for an additional 30 minutes. The cooking time will vary based on the temperature of your oven and how well done you like your latkes. Latkes should be deep gold on both sides when done.

This makes approximately 24 small latkes. The recipe can be easily halved or doubled. Hanukkah Samayach!
Posted by kosherliz at 4:16 PM No comments: Links to this post

I'm still teaching my class on how to make fruit bouquets, and have done two wonderful classes this season. Fruit bouquets make great gifts and they are of course *zero* WW points! It's a fun class and I always bring a very easy to follow how-to guide. Let me know if your shul or organization is interested; I'm happy to share prices and other pertinent information about the class.
Posted by kosherliz at 3:59 PM 2 comments: Links to this post

Classically Kosher is Nominated for a Best of Kosher 2011 Award!


The new magazine Joy of Kosher, has developed a contest called Best of Kosher 2011, and my blog is nominated for Best Kosher Food Blog! I would love it if you would take the time to vote for my blog here. There is no login required. If I win the contest, perhaps I will finally get the opportunity to turn my recipe collection into a cookbook.

As my girls grow, I find it's even more important to cook and bake using healthy ingredients, while attempting to maintain the delicious "geschmack" of our classic Jewish dishes. This is what my blog is all about, and I'm excited to welcome visitors who are coming to see me from the Joy of Kosher site. Please feel free to look around! And don't forget to vote! Thanks!
Posted by kosherliz at 8:07 AM 1 comment: Links to this post 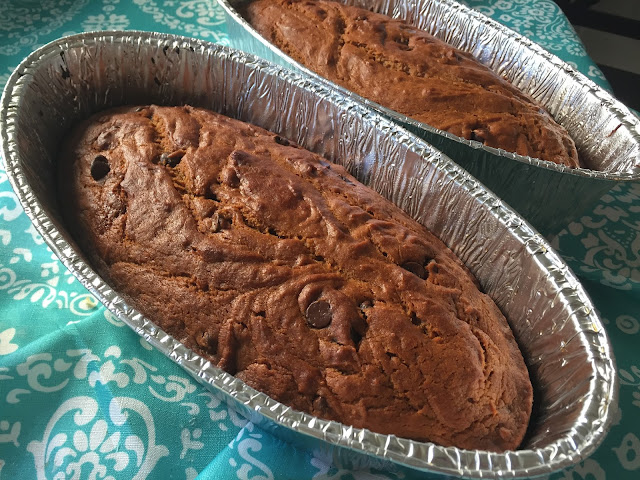 My cousin Laurie's pumpkin chocolate chip loaf is continuing to thrive in my family's kitchens every autumn. It's a perfect pareve dessert and breakfast item (lunch, afternoon snack, dinner...). The fall flavors of cinnamon and spice pair perfectly with the pumpkin, so all that's left is really to lighten it up. It's one thing to get your family eating pumpkin, but it's another thing to think that since it's pumpkin, you can have five muffins. Not at this calorie count, unfortunately! (9 WW points for a large muffin, btw).

I have used agave nectar and honey it in to replace the sugar, which works but makes a very different product, and this year I am experimenting with different kinds of flour to try to add fiber and the other health benefits of whole grains to dessert items. (Stay tuned for my recipes involving coconut flour, coming soon).

So this is the same recipe as before, but with white whole wheat flour. I found it to build a slightly chewier muffin, which was not altogether unwelcome. Remember that with the muffin method, it's important to only mix the batter until combined; Any longer will overactivate the baking powder and make a crumbly muffin. With white whole wheat, it holds together well but is drier than the same product made with white flour, so feel free to add a couple of extra tablespoons of pumpkin puree or applesauce. In this recipe's next incarnation, I am going to try a combination of agave, applesauce and honey along with the white whole wheat, to replace some of the sugar and all of the white flour. I invite you to try your own combination and tell me what you think!


Preheat oven to 350ºF. Sift dry ingredients together. Beat eggs, sugar and oil until light in color. Add, alternately, dry ingredients and pumpkin, mixing between each addition. Stir in chocolate chips. Pour until half full into large, ungreased tube pan (or 9 x 13 pan). Bake for 1 hour and 10 minutes, until dry in center. This cake also may be baked in muffin tins, two 8”x 8” pans, or two large loaf pans or three small ones. The baking time will be shorter if you use smaller pans or muffin tins, so keep an eye on them. Recipe can be easily halved or doubled.
Posted by kosherliz at 6:18 PM 3 comments: Links to this post

This Ain't Your Bubby's Chicken Hash!

I really, really like chicken sausage, and my friends at Jack's Gourmet just came out with a great new flavor of their delicious Glatt kosher sausages: Buffalo Chicken. It is so yummy that it won a new product award at Kosherfest 2011.

The great thing about gourmet sausages like Jack's (and no, they are not paying me!) is that they are easy to pull out of the fridge to turn into a fantastic and interesting meal. These sausages are not just for buns and mustard, though I'm sure they'd be great like that too.

What I like to do brown them and then combine them in one pan with veggies and a starch, like wild rice, potatoes or quinoa. With chicken sausage, the fat is low but the flavor is high. For those interested in low Weight Watchers points meals, the chicken sausage is only 3 points per link, and the total for this entire meal is 10 points for two servings, and the addition of purple cabbage really gives the dish heft so it is very filling. It's low-fat high-class chicken hash!


Boil the 1/4 cup of rice in 1 cup of water and a bit of salt. Slice the sausages on the bias (diagonally), and in a saute pan, brown them and remove them from the pan. Add 1-2 tsp. olive oil to the pan and sweat the onions for 10-15 minutes, until nicely browned. Season with salt and pepper to taste. Add the cabbage and the sausages and cover for 5 minutes just to simmer and let the flavors marry. Right before serving, add the arugula and let it wilt. Mix all together and serve.

Below is another version I did of this, with red quinoa, sauteed mushrooms and whole garlic cloves. I used the chorizo and instead of arugula, fresh spinach.